This silky, Watercress Soup is Spring in a bowl. It is simple to make and packed full of nutrients such as vitamin K, magnesium, potassium and calcium. I have given a vegetarian version here but it can be made vegan by omitting the cream or by using a non-dairy substitute.

‏Add the leeks, onion and potato and fry gently until the leeks and onion have softened and the potato beginning to cook. Avoid over heating as this will brown the vegetables and you will loose the lovely fresh green colour of the soup.

‏Once the vegetables have begun to soften add enough vegetable stock to cover (about 600ml but you can add more later if you want a thinner consistency).

‏Simmer until the vegetables are soft (about 10-15 minutes)

‏Turn of the heat and blend the vegetables until creamy.

‏Now remove the larger stalks from the watercress and add the leaves to the soup, the residual heat of the soup should be enough to soften the leaves… Avoid heating the soup too much at this stage as the leaves could over-cook and you’ll end up with brown soup instead.

‏Blend again until you reach the desired consistency and then add the cream if using.

‏Check the seasoning and it’s ready to serve with lots of crusty bread.

‏(Dietary advice… those on warfarin or other blood thinning medication should consult their doctor before adding foods high in vitamin K, such as watercress, to their diet). 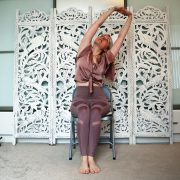 Yoga is for Every Body: Introduction to Chair Yoga 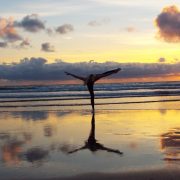 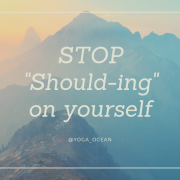 Stop Should-ing On Yourself
First Time Surfing… A Love Story.

Loose Your Stress: Find The Breath
Scroll to top